“Mud, mud, glorious mud
Nothing quite like it for cooling the blood
So follow me, follow
Down to the hollow
And there let us wallow in glorious mud”

A session with a distinct difference!

I’d always been intrigued by oil wrestling and it had been on my bucket list for a while. When I saw the write-up to Splosh Day, I realised I needed to give a ‘messy’ session a go!! Inferno was the natural choice of opponent, since she is the Splosh Queen and able to arrange such things! In the end, I opted for a session in Gunge/Mud.

The venue wasn’t far from Woking. It was only a few miles from the busy M25, but it could not have been more different. A fantastic rural retreat. When I turned up, the paddling pool was positioned out on the back lawn, with various substances in buckets undergoing their final preparation. It takes far more planning than a normal wrestling session, and my thanks to Inferno and her partner for their preparation work to make sure everything was perfect.

With the sun beaming down, we decided to move the paddling pool into a corner of the lawn for some shade.

Inferno covered firstly me in purple gunge, and I then returned the compliment. We started to wrestle, she trapped me in her scissors, but thanks to the lubrication provided by the gunge, I slid free. Gradually more-and-more purple and green gunge was added to the mix, as we slid around more-and-more. Inferno said I’d chosen nice colours, since the purple and green complimented each other.

I could slip out of most holds, but I knew Inferno was toying with me, just waiting for me to escape from one hold to get me into the next. We kept on returning to the same schoolgirl pin position, with Inferno on top.

The gunge was perfectly safe stuff – I accidentally ended up with a few mouthfuls of it and also ended up with more-and-more in my eyes, until I couldn’t see much.

I’m not sure how long it was, but I pointed out to Inferno that she hadn’t submitted me yet, at which point she put me into a choke – the one thing I couldn’t slide out of in the gunge and I had to tap. For once, the final score stayed in single figures – I tend not to be at all competitive in my sessions and I get dominated. I did enjoy being able to escape out of holds for a change, even if there was no doubt that Inferno was in control, although I nearly got lucky at one point.

After a while, the gunge starts to revert to a brown colour as it gets mixed together. Then it was time to add the mud as well. The pool went from rather slippery to even more slippery, and we grappled a little more. My ability to escape more than usual did lead to some laughable attempts to fight back, most of which resulted in a hug-type position. If it was possible to hug people into submission, I’d be unbeatable.

We finished off with Inferno tying me up with rope, before a final little bit of wrestling with me tied up, before Inferno struck a victory pose, while sat on my chest.

That wasn’t quite the end of the story, simply because there’s then the clean-up operation. Despite a lengthy shower, I still ended up bits of gunge here-and-there, while I did notice the following day, that my skin felt much smoother than usual! By the time I got back outside, Inferno and her partner were cleaning everything down.

I thoroughly recommend ‘messy wrestling’. It’s a nice change, to be wrestling while slipping and sliding at the same time. It’s probably something of a leveller for untrained males against skilled females as well. Gunge is our friend!

Inferno is the woman for such sessions as well; she’s professional and makes sure everything is set up, and then it’s great fun to wrestle with this intelligent and beautiful lady. 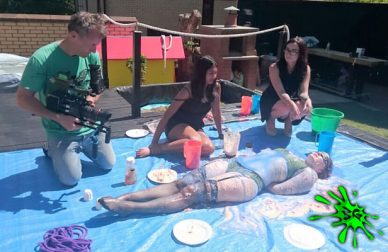